Dyeing with Indigo is a new direction for me, I’m not quite sure why I haven’t gotten to it earlier! In the past few days I have just begun to dye with it. I’ve started out with a hydros vat, but I think I Edit!! Apparently I was misinformed by a BOOK! I can set up a huge hydros vat and keep adding to it, so I will do that rather than play with hazardous materials (zinc)!

It has been a challenge to dive into this without a real knowledge of it, and with no help, but I have been really enjoying working with it, even if a little frustrated at times.

Still I did manage to do some pretty decent stuff, although I think my patience needs a bit of work, I think I began using my vat before it was really “ready” because I am yet to achieve a super deep indigo.  Despite this, I did still get some lovely blues, some pale and summery, some steely blue like the sea on an overcast day, and some in between!

I had less success dyeing protein fibres than cellulose fibres, so I won’t post any pictures of those, but I did make some new couch cushions out of some linen. Ah linen, I love it so. It’s such an interesting and luxurious fabric! It has so much character to it too. I just love it. 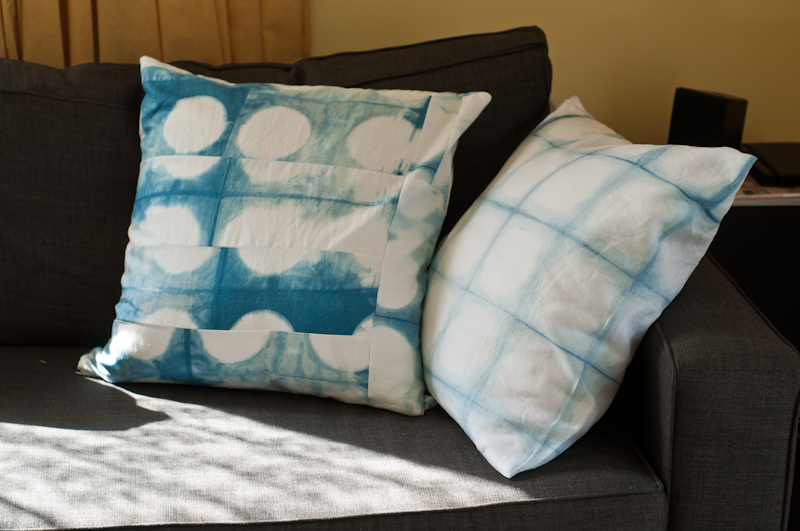 I also have some other pieces but I have some sewing to do with them first before I post pictures.

In other news I have started to sort out a little shop! You can see a link to it at the top of the page. It’s currently only get a test item listed, but I hope to have one or two things available in the next few days.